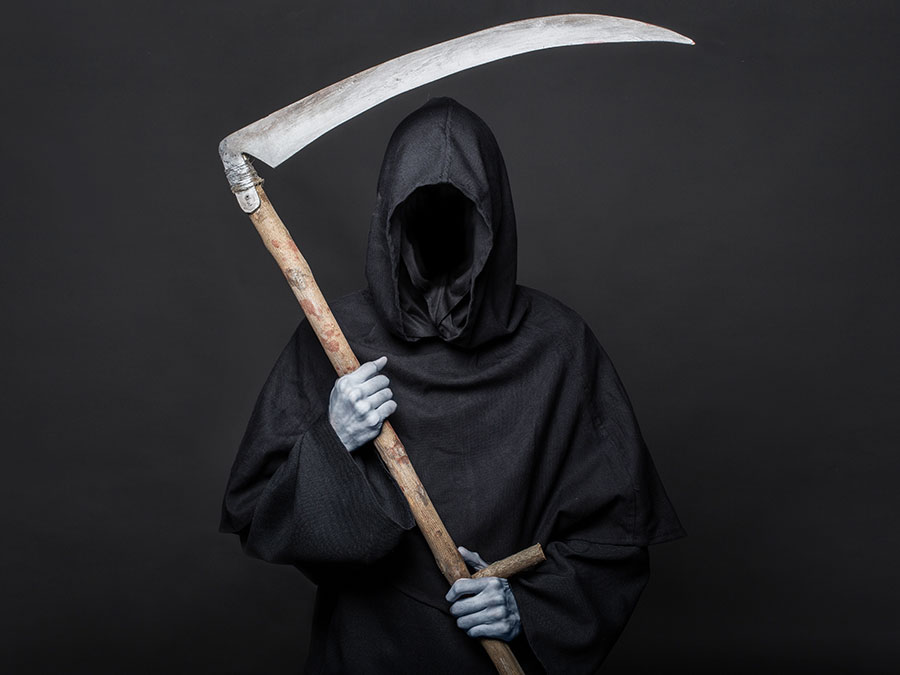 Death was changing into her swim suit in the locker room. She used to swim a lot when she was Alive, but it had been many years since her job had taken her to a pool and she thought she’d get in a few laps while she was there. Not that she needed the exercise — she was a Skeleton, after all. She wouldn’t be able to feel the cool water on her skin or even smell the chlorine. But Death could remember those sensations and the physical act of jumping into a swimming pool was enough to conjure up the memories.

Her next Name was scheduled to be at the lap swim in half an hour. Death took a final glance at the spreadsheet on her iPad before closing it into the locker with her Cloak and Scythe. Allison Marie Stevens. 72 years. 5’5” tall. Curly, medium-length blonde hair. Blue eyes. Retired. Widowed, 3 adult children. High School Pool.

Death activated her Powers of Similarity and assumed a similar look to what she imagined Allison Marie Stevens looked like. She glanced in the mirror on her way to the pool and stopped to stare at her new, freshly-wrinkled skin. Vanity still had a strong pull in the Afterlife, and she had half an hour before her appointment, so she reverted to her Image of Self and became the leggy 24-year-old athlete she had been in her former Life.

Death had lived through the phases of aging like a person of typical lifespan. She had been an athlete most of her life, slowing down as the decades added up until the day came when she could only take gentle walks with her cane. She counted herself lucky that her End arrived before she was totally bedridden, and because of that, didn’t feel guilt for her assignment at the pool.

But still, why not look like a 24 year old in a bathing suit when you have the chance?

Death did a half-turn to check out her butt in the mirror. Looking good, she thought, and gave herself a flirty little wink as she exited the locker room and walked onto the pool deck. She tucked her hair into her cap, adjusted her goggles over her eyes, and dove into an empty middle lane.

Even though Death technically didn’t have skin and couldn’t feel the temperature of the water, one of her strongest memories was the shock of the cold when she first dove into a pool. She added some goose bumps to her Appearance for a more realistic experience.

Swimming is a lonely activity for the most part. With her head underwater and staring down at the tiled black line of her lane, Death could only contemplate her Existence. She remembered when she was in high school, conjugating French verbs as she swam to stave off boredom; she didn’t need to do that anymore, having Infinite Knowledge as one of the job perks. Her work took her around the world occasionally and she needed to speak every language, but only when a war or natural disaster overwhelmed the local offices.

Her mind turned to her next job as she counted off lengths of the pool with her steady freestyle stroke. Allison Marie Stevens was 72 years old. Had she accepted the idea she might die soon? Death recalled a businessman, 96 years old, who fought his End thinking he still had to control his children’s lives and his material empire; he couldn’t imagine how the world could still spin without him. But an End is an End, and everyone’s got one. Since he refused to Pass quietly and take the Leisurely Option of Afterlife, he was assigned to the Bureau of Timetables and Scheduling and now was one of Death’s most reliable subordinates. He never called in sick, and often opted for overtime when asked.

But Allison Marie Stevens? It was time to find out how she would accept her Fate. Death pulled off her goggles and cap and hopped out of the pool. Better for the lifeguard if she took care of work in the locker room.

As she walked through the door, Death saw only one woman sitting on the bench in front of the lockers, and since it was Time, it had to be her. Normally, Death wouldn’t chat up her assignments but it was a slow day. She retrieved her towel and Scythe and sat down beside Allison Marie Stevens.

“Did you have a nice swim?” the older woman asked Death, who had so enjoyed being in her 24-year-old body that she forgot to resume Similarity.

No matter. Most older women didn’t have a problem chatting with a younger woman. At a certain age, or with a certain satisfaction of life, jealousies become irrelevant. Allison Marie Stevens gave Death a quick once-over glance, taking in her long legs and youthful shape and perhaps thought momentarily about her own youth, and smiled into her eyes.

“The water was cold,” Death replied, knowing no such thing. “Are you prepared?” she asked, although she wasn’t sure if she was talking about the swim or the Afterlife.

That was all the answer Death needed, and touched the woman with her Scythe.

Again, just a draft, maybe it’ll be a real project soon. I hope you enjoyed reading.

One thought on “Death, part 2”