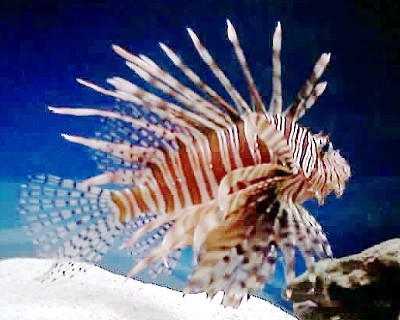 I was given a spear on the first dive, as I was in almost every dive since Mexico. I loved that I could show up to a dive shop, talk to them for five minutes and be given a spear. The three- prong spear is known the world over as a “Hawaiian sling,” so when I told them I lived in Hawaii, they automatically assumed I knew what I was doing. Plus, carrying a spear made me feel like a badass compared to the other tourists, so I never passed up the opportunity.

Lionfish are out of control throughout the Caribbean, so there is no limit to the amount you can kill, or any restrictions on the way you do it.

I always have a bit of trouble killing with my first shot; I always hit them in the gut and they just hobble away, and I have to chase them down and shoot again. In Belize and Honduras, giant groupers smelled the meat and waited for me to release my lionfish, and dead or not, they would suck them down in a single gulp. But there was nothing to eat them in Bocas; they were the biggest fish I saw. I killed four on my first dive, and with nothing to eat them half-alive, I had to scrape them from my spear with a rock or my fin and try again for the kill. I was a bit careless on my last kill and stabbed myself with one of its venomous spikes while I was scraping it off the spear.

I’d heard a lot of stories about lionfish stings, and none were pleasant. The effects range from those of a bad bee sting to hospital time for a full-on allergic reaction. When I felt the spike enter my thumb I thought, “Oh, great, maybe I’ll have cardiac arrest at 50 feet; that’ll be a new experience.” It was instant, throbbing pain. I swam up to my dive master and used hand signals to try to tell him that I stabbed myself with a poisonous fish but I wasn’t dying yet, so no worries. I think he understood.

By the time I finished the first dive, my thumb was almost twice its normal size, bright red, and massively painful. But since we hadn’t yet found any seahorses, I refused to be taken back and we went on to our next dive site.

By the end of the second dive, my thumb was almost back to normal, but I still planned on drinking plenty of rum afterward to bully any remaining toxins out of my liver. It helped that a fairly unattractive man was diving in a Speedo in front of me; I was so grossed out every time I looked up that I forgot about the pain.