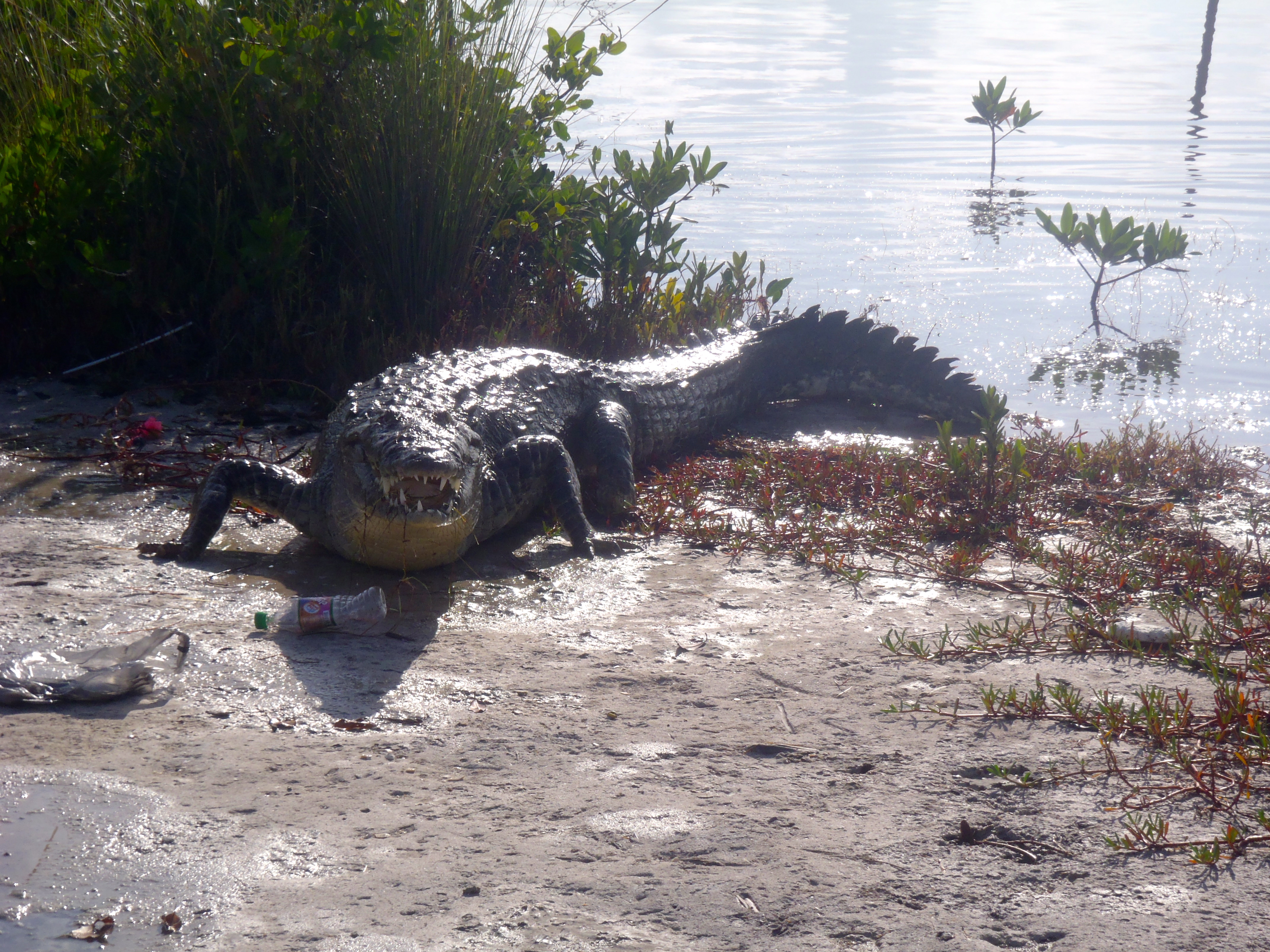 This is an excerpt from the new book, one of my favorite adventures on the trip.  It took place in Ambergris Caye, Belize.

On my final day, John and I went on a last crocodile expedition, this time to the south side of the island. We heard there was a place to see them just off the side of the road, so we jogged to the water tower. I was dying; that was the farthest I’d run in weeks, and in the blazing sun as well. We took the side roads by the lagoon, and knew we were in the right place when we saw the “do not feed the crocodiles” sign and saw a croc briefly before he went under. Feeding the crocs carried a $1000 fine or six months of jail time, according to the sign.

We didn’t spot any others, so we kept walking until we found a store to get some drinks. I asked where the best place to see them was, and apparently it was right where we were. The store had frozen chicken legs, so we bought a couple pounds and headed back. It was so hot I carried the ice-cold bag of drumsticks on the back of my neck; it was worth the purchase even if we didn’t get to feed the crocs. Police presence on the island was pretty minimal, so we weren’t too worried.

Our plan was to thaw the chicken in the water near the edge so we could break it up, tie the individual legs on long pieces of vine that were growing nearby, and go “fishing” for crocs. We made sure to get off the main road so we wouldn’t be spotted. As we were waiting for the chicken to thaw, a monster crocodile swam up and sat there, staring at us. He was inches from the floating chicken but didn’t seem to know exactly where it was since it was in a patch of sea grass. John picked up a short stick and pushed the chicken legs toward the big crocodile and instantly it lunged and swallowed the legs whole. Probably the scariest thing I’ve ever seen in my life was how fast this thing moved and how many teeth it had. I was a little nervous when it swam up, but after see- ing him move I was terrified.

I really hadn’t considered what would happen if we saw one since we had such bad luck on our first attempt, nor had I considered how frightening they might be. The chicken wrappers and John’s water bottle were sitting on the ground where we left them a few feet from the water, and the croc could smell it. Slowly, he climbed out of the water to investigate the possibility of more chicken, and that was when I got to see his claws. It was a thousand times more terrifying than when he was just sitting in the water. His eyes were tracking every move we made; as we walked around, he shifted his body to keep us in sight. No wonder the authorities didn’t want us to feed them.

The crocodile moved to check out the chicken wrapper but picked up John’s water bottle instead, mashing it several times in his jaws before spitting it out. My level of terror spiked. Terror for me, anyway. I wasn’t sure John was bothered at all. He’d done a lot of crazy things in his life; he was an adrenaline junkie who looked like a school teacher. I’m still not sure exactly how he convinced me crocodile hunting was a good idea, but traveling solo meant mak- ing friends where I could. All I could think about at that time was that moments before, I was holding a partially defrosted chicken and trying to tear the pieces apart, and how much I smelled like the croc’s last snack. I slowly began backing away.

I recovered enough of my wits to turn on my video camera, thinking that if the croc charged John, I’d have some great foot- age for his Darwin Award. The footage is funny only because it’s completely unwatchable from my hands shaking so badly. The croc finally swam off, and as we were walking home I asked John what he would have thought if a crocodile that size had approached us in the kayak the other day. He shrugged, not at all disturbed. I’m glad I didn’t think this idea through very well, or I would have missed a great experience.

Add these to your reading list (and request them at your local library):

3 thoughts on “Crocodile hunting in Belize”