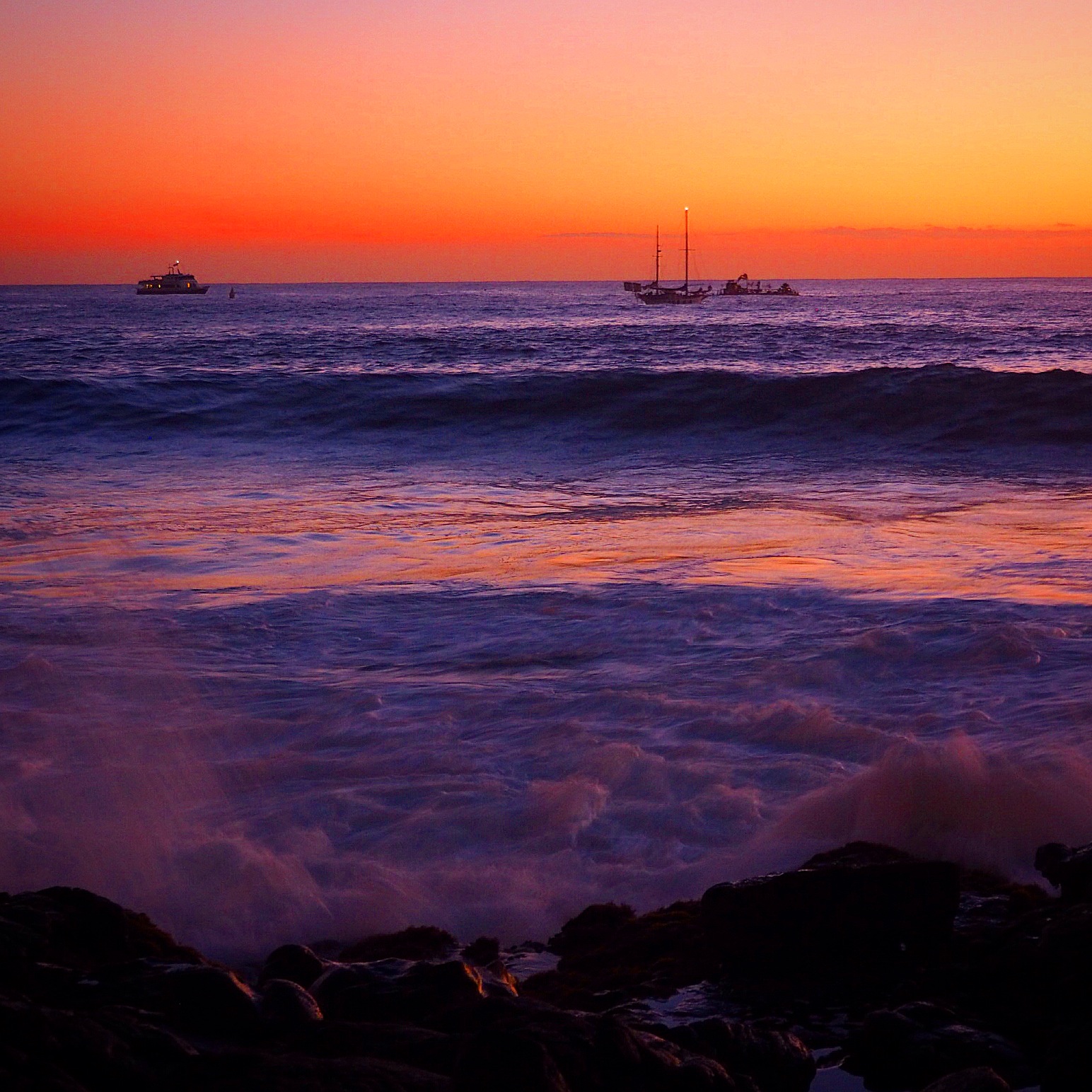 My first dives on the big island were completely unlike what I expected.  Since a northwest swell had started to come in, and all the dive companies I called were sold out, I could only find a company to take me on a shore dive.  Bill, at the Hawaiian Dive Shack, didn’t want to fill up a boat and cancel so he was turning away business.  But he was willing to jump in my car and take me somewhere.  To me, this meant picking him up at his shop, driving to the nearest pier, and swimming out; therefore, I didn’t bring much beyond my dive gear.  To Bill, a decent shore dive was an hour away, which I didn’t realize until 20 minutes into the drive when I finally asked him where we were going.  We drove to Honaunau Bay, or 2 Step, by the Place of Refuge.  The bay is called 2 Step because of the two rock steps to get into the water.  From a short distance I could see the Place of Refuge; if a criminal or defeated warrior in the old times could reach Pu’uhonua before being caught, he was given protection until no one was looking for him anymore.

Bill and I suited up and made our way to the steps for our first dive.  The swell was starting to come in so there weren’t many people in the water; instead, most snorkelers were standing around the steps wondering how they were going to get in, the water was surging and crashing on the rocks with each set wave.  We sat on the steps, put on fins, waited for a big wave, and let it suck us off the rocks.  After a short swim out, the visibility was good and plenty of fish were happily swimming along.  The highlight of our first dive was a spotted eagle ray cruising by, he let us swim with him until we were pretty far out and decided to turn around.  Half-way through this dive I noticed that my GoPro had condensation inside the housing, it was a panic moment.  But nothing to be done about it, it was either ruined or not at that point, so might as well finish the dive.  We saw a couple turtles, stayed out until I thought I was going to freeze to death, and my Dayquil wore off.  I had borrowed Pablo’s wetsuit, and it wasn’t nearly thick enough to keep me warm; I was mostly thinking of the $9 per dive over four days that I would save by not renting a suit, and not that I’m always cold.  I’d say ‘lesson learned,’ but I knew better already.  I did warm up a little trying to get out of the water through the waves, it’s easier to get sucked off a rock going in than to ride a wave in and not bash my head getting out.  Especially in front of a crowd, wondering how it would turn out.

I dried off my GoPro, Bill changed our tanks, we ate granola bars, and got ready to go back out.  I had taken four Dayquils before I left to make sure that my nose would stop running and my ears would clear, but since I hadn’t expected such a long drive I hadn’t brought any more and my cold came back.  Not enough to stop me from diving, though.  We made our daring entry through the waves, again, to the amazement of all the people standing around with fins in hand, and swam to the other side of the bay.  I didn’t risk bringing my camera again and just enjoyed the scenery.  My mask was brand new, and even though I used plenty of defog, I had to continually let in water, swish it around, and blow it out to get a clear view.  When my cold medicine wore off for good, about 10 minutes into the second dive, every time I cleared my mask I blew snot into it, which left slimy slug trails across my vision.  Awesome.

By the end of the second dive, getting out of the water was way more challenging.  There were no longer any other people swimming, they were all standing by the steps.  Bill and I floated for a couple minutes watching the set waves, which were pounding the rocks, forcing the people to run back and forth, tripping over each other to get out of the way.  In the end, it was either ‘just do it,’ or swim all the way around to the shallows by the Place of Refuge.  We just did it, and no one was hurt, just a banged tank; it was kinda fun, really.  As I sat back on the rocks taking off my fins, a man walked up and said ‘good thing he was with you.’

The ride home was a guided tour of the side of the island.  Bill was great, and wanted me to stop anytime I saw something interesting.  I also learned about his entire life.  He opened his dive shop when he moved to Kona, and has since been buying the stock from every shop that goes out of business.  His place is packed with gear.  He knows all the prices of every item of every competitor, and at the end of our trip, he gave me a regulator and a shorty wetsuit to put on top of Pablo’s so I wouldn’t be cold, even though the rest of my dives were with a different company.  All for free.  Super nice guy.

The rest of my day was fairly uneventful – a nap, a trip to the hotel gym after I finally saw a full-length mirror for the first time in months, and horrible pad thai.  Good times.